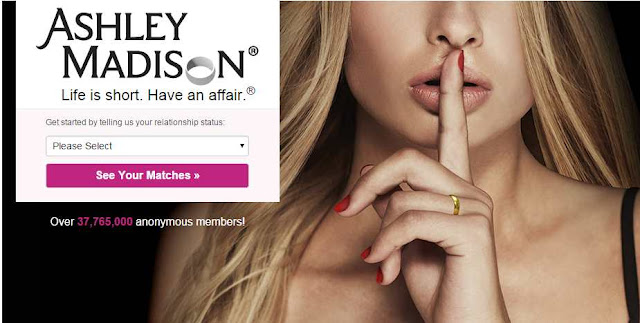 Ashley Madison is a Canadian based online dating service and social networking service marketed to people who are already in a relationship, whose slogan is "Life is short. Have an affair." The website was launched in 2001. The name of the site was created from two popular female names, "Ashley" and "Madison".


One of the Impact Team member said, "will profit in a big way" if they sell the stolen personal details.

ALM Chief Executive Noel Biderman confirmed the hack given interview to Krebsonsecurity , and said the company was “working diligently and feverishly” to take down ALM’s intellectual property. Indeed, in the short span of 30 minutes between that brief interview and the publication of this story, several of the Impact Team’s Web links were no longer responding.

“We’re not denying this happened,” Biderman said. “Like us or not, this is still a criminal act.”

A member of a hacking community claims Impact Team "will profit in a big way" if they sell the stolen personal details.

However, according to the Impact Team, Ashley Madison made money from the paid "Full Delete" service that does not work.

ALM statement in Blog,
"We were recently made aware of an attempt by an unauthorized party to gain access to our systems. We immediately launched a thorough investigation utilizing leading forensics experts and other security professionals to determine the origin, nature, and scope of this incident.

We apologize for this unprovoked and criminal intrusion into our customers’ information. The current business world has proven to be one in which no company’s online assets are safe from cyber-vandalism, with Avid Life Media being only the latest among many companies to have been attacked, despite investing in the latest privacy and security technologies.

We have always had the confidentiality of our customers’ information foremost in our minds, and have had stringent security measures in place, including working with leading IT vendors from around the world. As other companies have experienced, these security measures have unfortunately not prevented this attack to our system.

At this time, we have been able to secure our sites, and close the unauthorized access points. We are working with law enforcement agencies, which are investigating this criminal act. Any and all parties responsible for this act of cyber–terrorism will be held responsible."

"Full Delete netted [Avid Life Media] $1.7mm in revenue in 2014. It’s also a complete lie," the group wrote in a statement released Sunday. "Users almost always pay with the credit card; their purchase details are not removed as promised and include real name and address, which is, of course, the most important information the users want to be removed."