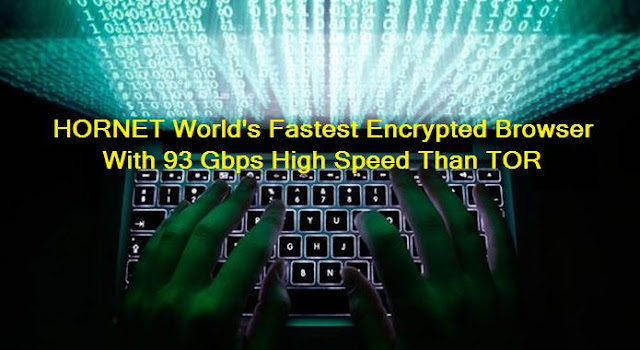 And its developed by five researchers from UK, USA and Switzerland.

Hornet developers said that its browser is the most fastest with more security level than TOR. Tor network, which handles over 2 Million user on its network daily. While surfing TOR its slow and using to hide a user's IP address. HORNET developers found the weakness of TOR and lessen the cryptography work needed from each level.

According to HORNET PDF,

"We present Hornet, a system that enables high-speed end-to-end anonymous channels by leveraging next-generation network architectures," write the authors of the paper. "Hornet is designed as a low-latency onion routing system that operates at the network layer, thus enabling a wide range of applications"

“HORNET is designed to be highly efficient,” researchers said. Without sacrificing security, the network supports data transfer speeds of up to 93GBps and can be scaled at little cost.

Specifically, our contributions are the following:

• We design and implement HORNET, an anonymity system that uses source-selected paths and shared keys between endpoints and routers to support onion routing. Unlike other onion routing implementations, HORNET routers do not keep per-flow state or perform computationally expensive operations for data forwarding, allowing the system to scale as new clients are added.

• We analyze the security of our system, showing that it can defend against passive attacks, and certain types of active attacks. Our system provides stronger security guarantees than existing network-level anonymity systems.

• We evaluate the performance of our system, showing that anonymous data processing speed is comparable to that of LAP and Dovetail (up to 93.5 Gb/s on a 120 Gb/s software router). Each HORNET node can process traffic for a practically unlimited number of sources.
Labels: Anonymous, Cyber News, Scripts, Security, Tools, Tutorials
Share This To :
Newer Post Older Post