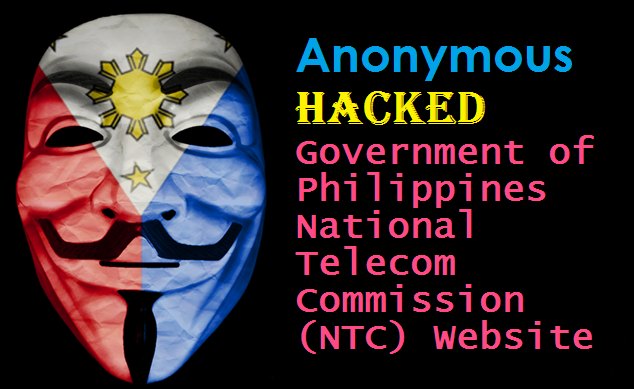 The reason behind to hack NTC website are charging and delivering of Internet Services.

Internet access in the Philippines costs $18/Mbps, as compared to the global average of $5/Mbps.

In the message posted on website, Anonymous Philippines said, 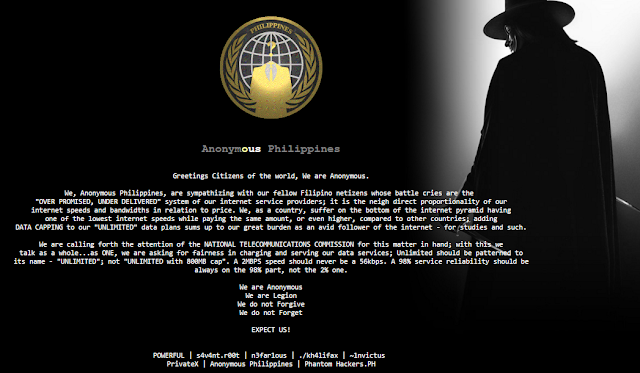 "Greetings Citizens of the world, We are Anonymous.

We, Anonymous Philippines, are sympathizing with our fellow Filipino netizens whose battle cries are the
"OVER PROMISED, UNDER DELIVERED" system of our internet service providers; it is the neigh direct proportionality of our
internet speeds and bandwidths in relation to price. We, as a country, suffer on the bottom of the internet pyramid having
one of the lowest internet speeds while paying the same amount, or even higher, compared to other countries; adding
DATA CAPPING to our "UNLIMITED" data plans sums up to our great burden as an avid follower of the internet - for studies and such.

We are calling forth the attention of the NATIONAL TELECOMMUNICATIONS COMMISSION for this matter in hand; with this we
talk as a whole...as ONE, we are asking for fairness in charging and serving our data services; Unlimited should be patterned to
its name - "UNLIMITED"; not "UNLIMITED with 800MB cap". A 2MBPS speed should never be a 56kbps. A 98% service reliability should be
always on the 98% part, not the 2% one.