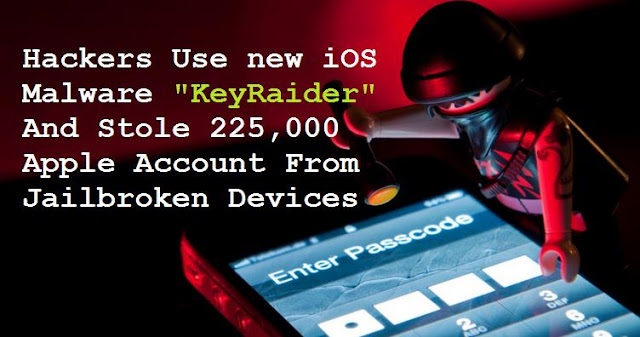 The attack was first discovered by i_82, a student from Yangzhou University and member of WeipTech. WeipTech (Weiphone Tech Team) is an amateur technical group consisting of users from Weiphone – one of the largest Apple fans websites in China. Previously, WeipTech cooperated with us to report on other iOS and OS X malware including AppBuyer and WireLurker.

KeyRaider was distributed by Cydia in China, but its effect to other countries as well, like France, Russia, Japan, United Kingdom, United States, Canada, Germany, Australia, Israel, Italy, Spain, Singapore, and South Korea.

Malicious Code Exist
The KeyRaider malicious code exists in Mach-O dynamic libraries that are used as plugins for the MobileSubstrate framework. Through MobileSubstrate APIs, the malware can hook arbitrary APIs in system processes or in other iOS apps.


How to Protect?
Users can use the following method to determine by themselves whether their iOS devices was infected:


If any dylib file contains any one of these strings, we urge users to delete it and delete the plist file with the same filename, then reboot the device.

We also suggest all affected users change their Apple account password after removing the malware, and enable two-factor verifications for Apple IDs

Next time if you want to do Jailbreak of your iOS devices then think first. KeyRaider only effects on Jailbroken iOS devices.