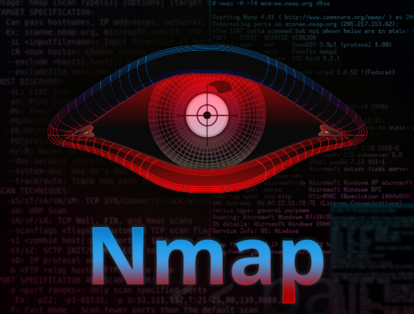 Nmap (“Network Mapper”) is a free and open source (license) utility for network discovery and security auditing. Many systems and network administrators also find it useful for network inventory, managing service upgrade schedules, monitoring host or service uptime, and many other tasks.

Nmap uses raw IP packets in novel ways to determine what hosts are available on the network, what services (application name and version) those hosts are offering, what operating systems (and OS versions) they are running, what type of packet filters/firewalls are in use, and dozens of other characteristics.

It was designed to rapidly scan large networks, but works fine against single hosts. Nmap runs on all major computer operating systems, and official binary packages are available for Linux, Windows, and Mac OS X. In addition to the classic command-line Nmap executable, the Nmap suite includes an advanced GUI and results viewer (Zenmap), a flexible data transfer, redirection, and debugging tool (Ncat), a utility for comparing scan results (Ndiff), and a packet generation and response analysis tool (Nping).

1. Major Nmap Scripting Engine (NSE) Expansion
As the Nmap core has matured, more and more new functionality is developed as part of our NSE subsystem instead. In fact, we've added 171 new scripts and 20 libraries since Nmap 6. Exmaples include firewall-bypass, supermicro-ipmi-conf, oracle-brute-stealth, and ssl-heartbleed. And NSE is now powerful enough that scripts can take on core functions such as host discovery (dns-ip6-arpa-scan), version scanning (ike-version, snmp-info, etc.), and RPC grinding (rpc-grind). There's even a proposal to implement port scanning in NSE. [More Details]

3. Infrastructure Upgrades
We may be an 18-year-old project, but that doesn't mean we'll stick with old, crumbling infrastructure! The Nmap Project continues to adopt the latest technologies to enhance the development process and serve a growing user base. For example, we converted all of Nmap.Org to SSL to reduce the risk of trojan binaries and reduce snooping in general. We've also been using the Git version control system as a larger part of our workflow and have an official Github mirror of the Nmap Subversion source repository and we encourage code submissions to be made as Github pull requests. We also created an official bug tracker which is also hosted on Github. Tracking bugs and enhancement requests this way has already reduced the number which fall through the cracks. [More Details]

4. Faster Scans
Nmap has continually pushed the speed boundaries of synchronous network scanning for 18 years, and this release is no exception. New Nsock engines give a performance boost to Windows and BSD systems, target reordering prevents a nasty edge case on multihomed systems, and NSE tweaks lead to much faster -sV scans. [More Details]

5. SSL/TLS scanning solution of choice
Transport Layer Security (TLS) and its predecessor, SSL, are the security underpinning of the web, so when big vulnerabilities like Heartbleed, POODLE, and FREAK come calling, Nmap answers with vulnerability detection NSE scripts. The ssl-enum-ciphers script has been entirely revamped to perform fast analysis of TLS deployment problems, and version scanning probes have been tweaked to quickly detect the newest TLS handshake versions. [More Details]

6. Ncat Enhanced
We are excited and proud to announce that Ncat has been adopted by the Red Hat/Fedora family of distributions as the default package to provide the "netcat" and "nc" commands! This cooperation has resulted in a lot of squashed bugs and enhanced compatibility with Netcat's options. Also very exciting is the addition of an embedded Lua interpreter for creating simple, cross-platform daemons and traffic filters.

7. Extreme Portability
Nmap is proudly cross-platform and runs on all sorts of esoteric and archaic systems. But our binary distributions have to be kept up-to-date with the latest popular operating systems. Nmap 7 runs cleanly on Windows 10 all the way back to Windows Vista. By popular request, we even built it to run on Windows XP, though we suggest those users upgrade their systems. Mac OS X is supported from 10.8 Mountain Lion through 10.11 El Capitan. Plus, we updated support for Solaris and AIX. And Linux users—you have it easy.