World's Oldest Torrent Continues To Being Shared After 4,419 Days 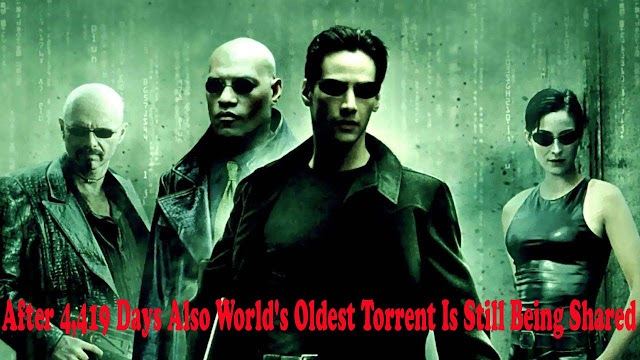 World's Oldest Torrent Continues To Being Shared After 4,419 Days

According to TorrentFreak, the world’s oldest surviving torrent, a fan-made remake of 'The Matrix', is still being hosted by fans around the globe. Its been 4,419 days (over 12 years) since the movie became available via BitTorrent on December 20, 2003. Most torrents die out in a couple of years when users delete the associated files off their hard drives.


BitTorrent is an excellent distribution mechanism for so many favorite movies, but for a file to live on at least one person has to keep sharing it, and if it is not so then most torrents die eventually after the public loses interest.

There are so many who are actively downloading the file, most likely after they found a copy of the release on one of the torrent sites where it remains available. And this shows that "The Matrix ASCII" is the oldest torrent that’s still being actively shared.

There was no accurate statistics available there was a believe that it has been downloaded by tens of thousands of people over its lifetime. Previously this 12-year-old release of The Matrix ASCII comes with a DVD cover and insert.

“This work is a parody. As such I do not believe that this DVD has any possibility of competing with the original in any market. It is not for sale,” the disclaimer reads.

One of the fans of Matrix said that

"a long time ago there was a fan-made film in the Matrix universe called The Fanimatrix (https://en.wikipedia.org/wiki/The_Fanimatrix). Around a decade ago, I downloaded it through BitTorrent. Then a few years ago, I found it in my old files, still next to its original torrent file. Ever since then, I seed it on and off, in the vain hope that anyone knows it exists, has its torrent file (or magnet link), and wants to get a copy of the full file.
If somehow this torrent becomes live again, it's even older than the Matrix ASCII mentioned in this article, by a few months.
Name: The-Fanimatrix-(DivX-5.1-HQ).avi
Hash: 72c83366e95dd44cc85f26198ecc55f0f4576ad4
Created by:
Created on: Sat Sep 27 23:08:42 2003
Piece Count: 516
Piece Size: 256.0 KiB
Total Size: 135.0 MB
Privacy: Public torrent"


Those people who’ve downloaded a copy of The Matrix have thus far responded mostly positively after watching the ASCII movie. That is, those who knew what to expect. Those looking for the original Matrix movie are less appreciative

The response of one unhappy downloader was

“Dude, tell me what to do with this Matrix ASCII, cause the picture is all green n stuff, can’t even see what’s going on. And, its in 4 VOB files, but why?”