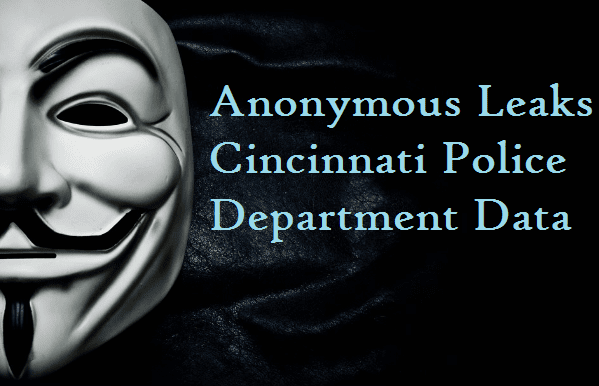 
The details for 52 officers and employees of the Police Department of Cincinnati has been leaked by the Hacktivist group of Anonymous hacker following the shooting of a black man who was believed to be unarmed.

Because of the unnecessary death of Paul Gatson, they blamed the Police department who was shot and killed on Feb 17, 2016. When the officers were trying to arrest him at that time, he was shot numerous times by police officers. Before that, he was stumbling out of pickup truck and also crashed a telephone pole.

Because of Paul Gatson's death it sparked the data leak of 52 officers and employees of police department. Police officers also showed the two videos of this incident to justified their own action, but all are in vain and the things have escalated after the New York Daily News pointing out the similar case a day earlier, where the suspect (Christopher Laugle, a white)pointed out a fake guns at one of the officers called in to investigate an assault, but they peacefully arrested him.

Anonymous member said in video that

"How does one man point a fake pistol at a cop and live while another man doesn't, but is killed execution style?"

In order to spread the message of its operation #OpAnonVerdict.

Police officers said that "they are not aware that the gun was fake, when the Christopher Laugle(a suspect) pointed it towards one of the officers. And he was arrested peacefully and released on the $2,000 bail also."

The Anonymous hacker (Anon Verdict group) released the leaked data by them publicly on the following:

But the leaked data doesn't contain any "private" data or information. It contains the information like (social media profile links, email addresses, the names of their family members, phone numbers, officers' names and home addresses). Eliot Isaac(chief of police) was the first name on the data dump with complete with his phone number and addresses of his known family members. Now the fear is that "the leaked data information can be used for retribution."

Steve Saunders(Cincinnati.com, police Lt) said that "Actually the group didn't hack any of the servers it was all the data which can also be searched via internet searches."

Masked man in the youtube video clip said that

"We have been sitting idle from far too long and letting the gang known as the Thin Blue Line murder citizens of US. Well, we have a message to not only the Cincinnati Police Department but to every law enforcement officer. When you murder a human being when you have other choices of containing your suspect available, we will make your officers' information public record."

Anonymous states they will continue to release further data,

"We will data dump as many officers as we see fit for each situation. We will not only release the officers' information who murdered the citizen but we will release those that have stood by in the department that did not speak up. Thin Blue Line, your game is over. You lost."