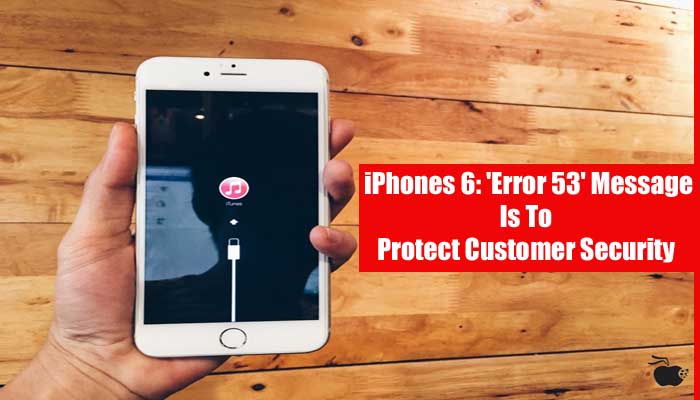 Nowadays Apple is in the controversies of its "Error 53" message on iPhones. According to them, it protects customer's security.

Thousands of iPhones 6 user is having their devices cost around hundred of pounds, and after they encounter the error message they left it useless. The Guardian reveals it on Friday.

In iPhone 6 we can easily unlock the device by touching the home button rather then inputting any four-digit security code. Home Button contains a Touch ID thumbprint reader that only contains the problem. And if any damaged happen to phone and if any non-Apple replaces the button, then it shut down the device immediately as an update of OS detects a non-standard component and after that you can't bring it back.

If iPhone 6 users are installing routine updates to iOS for iPhones and iPads then they only aware of this issue, otherwise it's not cogent.
According to a statement released in Guardian's story publication, an Apple spokesperson said that:

Some users encountered Error 53 message even though their device has not repaired. One of the users also suffered from this problem with the Touch ID sensor last year, he was the US technology writer Mike Wehner, But he replaced his device from Apple store but that doesn't mean that all the users are so lucky.

So many Apple customers left furious at the company’s stance, one Guardian reader comments:

A reader of the Boing technology blog said Apple should have advertised the fact rather than keeping it hidden.

About two-thirds of the company revenue relies only on the smartphones. From the past three months also, company shares have fallen more than 20%, and investors begin to doubt whether it can maintain the stellar growth posted since the iPhone first went on sale eight years ago.

According to their survey Apple said that from the last month their iPhones sales were flat, with about 74.8m devices bought in the quarter and their most recent device, the Apple watch, has failed to grab consumers’ imagination and iPad sales are also on the slide.

So, they have their expectations on their next launch that is iPhone 7 which is going to releases in September, but slowing global smartphone sales could make that a difficult feat to pull off even for Apple.
Labels: Cyber News, Mobile Hacking, Scripts
Share This To :
Newer Post Older Post