NSA Spied On Secret Meetings Between The Top Leaders 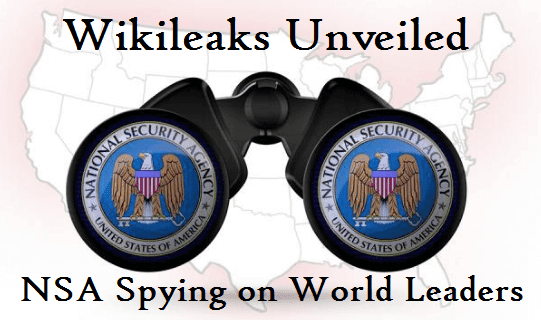 NSA Spied On Secret Meetings Between The Top Leaders

The top secret documents have been published by the Wikileaks in which there was information regarding the NSA spied. NSA spied on many world leaders private meetings, some of them are:

According to that documents, "NSA spied on a very high-level of meetings which are regarding any of environmental issues, economic problems etc."

Julian Assange (Wikileaks founder and editor) said that "The meeting of Ban Ki-Moon’s(UN Secretary General) is showed to you through this documentary, how to save the planet from climate change, and to also prevent or protect their largest oil companies, "

Previously they published about the stealing of secretary general’s DNA by the US diplomats, and the agreement has also signed by the US government, that they will not engage in such conduct against UN.

For common people it will be very interesting to see the UN's reaction. Everyone from world leader to sweeper all is at risk, because of the target to secretary general without any consequence.

The document which contains the another meeting was regarding the tasked by key EU and Japanese trade ministers in which they discussed about the WTO negotiations. Not only this, that document also included the secret conversation between Nicolas Sarkozy(former French President) and Silvio Berlusconi (former Italian Prime Minister) this means that NSA was able to gain access to a secret conversation between them.

"Apart from these all spied incidents, UN's Refugee Agency was also spied by NSA, in which NSA found that US intelligence agents reportedly kept tabs on the phone lines of the organization’s regional directors, including that of the regional representative of the United Nations Office of the High Commissioner for Refugees (UNHCR) for Central Asia, Bernard Doyle,"  according to the new report.

Johann Human's (Director of the Rules Division of the WTO) Swiss telephone line has also been targeted by the NSA, showed by Wikileaks.

According to CNN Report,

The Italian Foreign Ministry has summoned the U.S. ambassador, John Phillips, to clarify the news appeared (in) the press, according to which the Italian Prime Minister Silvio Berlusconi and some of his close collaborators would have been subject to wiretaps in 2011," a ministry statement reads.
Labels: Anonymous, Cyber News, Information Gathering
Share This To :
Newer Post Older Post