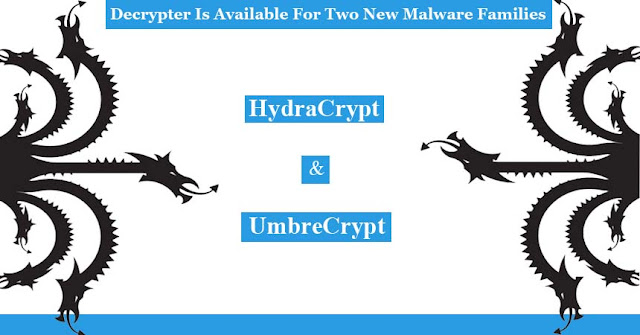 Up to 15 bytes of files was damaged irrecoverably due to the changes made by HydraCrypt and UmbreCrypt authors. For some file formats dedicated tools for repair and recovery both are available. And for file formats, the last trailing bytes can be easily repaired by just opening and saving the files.

If you want to determine the correct decryption key then firstly look for any encrypted file of your system, but you must have the original unencrypted version of that file also. If you don't have that kind of files then just go to the encrypted PNG files and download any PNG image from the web. Drag both the encrypted and unencrypted files to the decrypter executable. Then the decrypter will determine for the encryption key from your files and this process is very fast and depends on your processing speed.

After you received the decryption key, the message which you will get is like this:

"The message you receive after the decrypter determined the correct key for your system."

You need to just click on the ok button, but if any error comes then ensure that you have dragged and dropped the correct files. Once the error rectified all folders that you had selected will be decrypted recursively including all the files (sub-folder of selected folders).

Before decrypting a large number of files just check that the limited number of files is decrypted well. By doing this, you are sure that the decrypter figured out the correct key. It also saves a lot of your time. These malware doesn't leave any residue of the information of original file behind. To make sure that the result of decryption is correct, the decrypter will not delete any of the encrypted files on your system.

For downloading HydraCrypt and UmbreCrypt decrypter go through the below link: