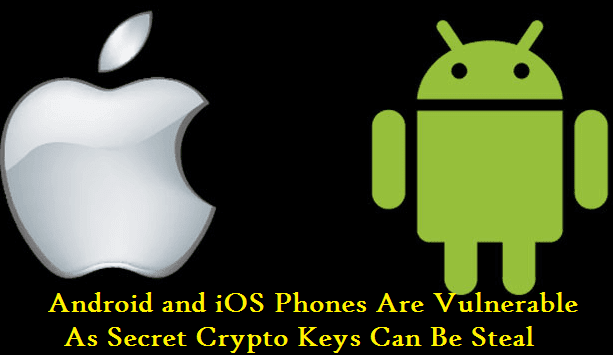 Android and iOS Phones Are Vulnerable As Secret Crypto Keys Can Be Steal.

A new attack has been devised by the Researchers by which the criminals can easily steal Cryptographic keys in Android and iOS devices, to protect Apple Pay accounts, the high-value assets and Bitcoin wallets. The attack called as a Non-invasive side-channel by the cryptographers.

The attack works against the Elliptic Curve Digital Signature Algorithm. Elliptic Curve Digital Signature Algorithm is a kind of fastest crypto systems. When a cryptographic operation is performing by the mobile device and at that time placing a probe near that device will allow an attacker to measure enough electromagnetic emanations. By this attacker can easily extract the secret key that authenticates the end user's data or financial transactions.

According to a blog which was published on Wednesday, the researcher wrote that,

"An attacker can non-invasively measure these physical effects using a $2 magnetic probe held in proximity to the device, or an improvised USB adapter connected to the phone's USB cable, and a USB sound card, Using such measurements, we were able to extract entirely secret signing keys from OpenSSL and CoreBitcoin running on iOS devices. We also showed partial key leakage from OpenSSL running on Android and from iOS's CommonCrypto."

Researchers tested this attack on Sony-Ericsson Xperia x10, which is running on Android, in that they able to fully extracting the key, and also said that this attack is practicable.

Some features of this vulnerable app are:

When the vulnerability is reported to the OpenSSL maintainers by the researchers, then in response the maintainers said that hardware side-channel attacks aren't a part of their threat model.

According to The University of Adelaide, Tel Aviv University and Technion in a paper published by them contains the following:

If the laptop was locked in an adjacent room then how the secret ECDH keys have been extracted, it is showed in that paper. By using the above attack, it will take only seconds to find the key. In 2013, the separate side-channel attack against RSA secret keys had been devised. Rather than electromagnetic emanation, it uses the electronics sound.

Sometimes, the attacks may prove difficult. In future may be in order to measure the leaks from further distances, some ways have been devised by the Researchers. And that the vulnerability has no longer larger effect on any end-users. To mitigate the risk of users, researchers have been working with the vendors(specific software).
Labels: Android, Bug, Cyber News, Exploits, Information Gathering, Mobile Hacking, Vulnerability
Share This To :
Newer Post Older Post