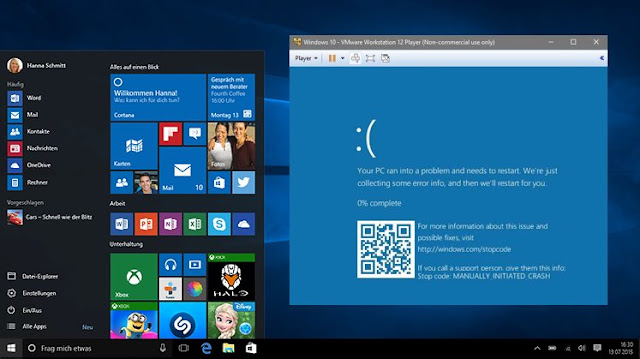 As you know that Windows 10 has already added most of the new features comparatively to Windows 8.1 as well as currently it had become the most popular OS for gamers too.

Though, it has one of the typical fail moments of Windows that seems that set to become the next pinched feature of Windows 10 the renowned Blue Screen of Death (BSOD).

The Blue Screen of Death that shows when Windows come across a significant error due to the issues of hardware or software that is used to demonstrates the QR codes in addition to the codes which have errors, in an effort that make it simpler for end users to recognize the potential of the troubles with their devices.

If you want to get more information about the problems regarding the web page then you could scan the code as well as pointed on the web page and it would be possible by using a smartphone or tablet.

Even by scanning the QR code with your smartphone, you will be able to immediately recognize that by which problem your PC could be a crash as well as find the support of the articles that will help you found the main reason of the problem. No longer that will help you to type the error messages that were lengthy into a web search.

The Verge, which spotted a screenshot of the new BSOD on Reddit noted that  “It’s the biggest change to the BSOD since the software maker removed a lot of crash details in Windows 8 and replaced them with a frowning face.”

In the past BSOD have been equally recognized for their requirement of help relating to the problems that could be the reason of their having in the first place, with the repeatedly mysterious code being the only justification for why one raised its head in the first place.

On the other hand, here Microsoft has an another prospect for assisting self-support when it comes to solving the problems about an installation of  Windows as it could recommend the support through a website. Even it could support through a devoted app for troubleshooting by using the QR code.

Whereas the QR code was first marked by Reddit user javelin NL, who had already installed the newest build of Windows 10 as well as its feature also which is set to be established on the anniversary of OS edition update that will be launched on this summer. Even in July, Windows 10 also celebrates its first birthday.

Even though this is not a revolutionary change. It is one that is sure to promote the millions of users of Windows 10. And as soon as their screen goes blue then hearts stop for a second.

On the Update Anniversary of Microsoft for Windows 10 that will carry lots of new features, including Ubuntu file system which will allow you to use Bash to run command-line Linux applications without a virtual machine.

Now the new QR codes are featured in the newest Windows 10 Preview of Redmond that Build 14316, which will introduce this summer as the Windows 10 Anniversary Update.