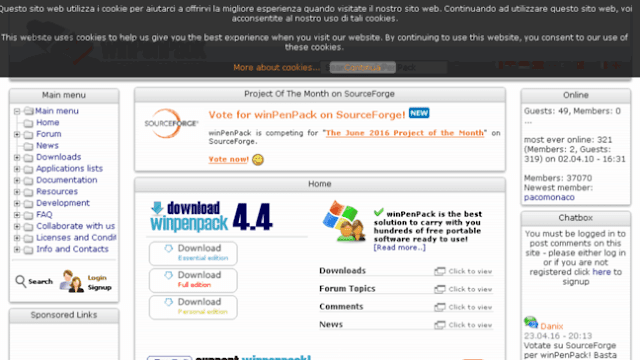 
winPenPack is an open-source software application that suites for Windows. Or you can say that  is a project that plans at gathering the most commonly used as well as most popular open source applications made portable, that’s why they can be implemented without any installation process from any kind of USB Flash Drive or Hard Disk.

The winPenPack suites recommend a wide range of transferable applications such as - office tools, internet tools, multimedia tools, development tools, security applications as well as other commonly used utilities. Everything you need that are completely free, open source and also portable!

The winPenPack main menu can be implemented from any type of not fixed storage device that is including as well as particularly from USB flash drives. In every different suite of winPenPack, the main menu is pre-configured to a list of all available programs including that programs which are belonging to other suites as well as it can be reduced at any time.

New programs can be added to the menu either manually (by means of the "Add" options or by drag-and-dropping them onto the menu) or automatically (please note that automatic installation is only available for X-Software, as opposed to portable applications).

Since May 2006, winPenPack has been enclosed by most of the major Italian PC publications in which including PC Professional, Win Magazine, Computer Magazine, Total Computer, Internet Genius, Quale Computer, Computer Week, and most of the others.