A Small Linux Operating System TinyCore 7.2 Is Available To Download 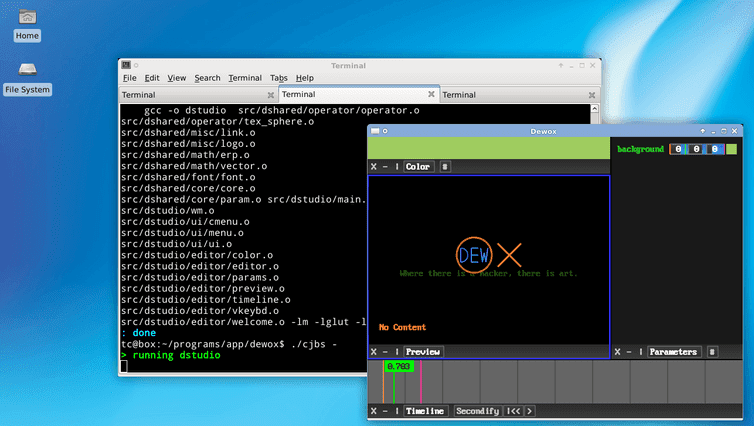 
Tiny Core Linux is available for 32 bit and 64 bit with multiple editions Core and Core Plus.

The Core Project is a highly modular based system with community build extensions.

What is TinyCore Linux?
Tiny Core distribution is like a customized version of the Linux kernel and other tools. Tiny Core is very small at Megabytes size and uses the Linux Kernel and a set of command-line (text interface) tools including busybox.

It starts with a recent Linux kernel, vmlinuz, and our root filesystem and start-up scripts packaged with a basic set of kernel modules in core.gz. Core (11MB) is simply the kernel + core.gz - this is the foundation for user created desktops, servers, or appliances. TinyCore is Core + Xvesa.tcz + Xprogs.tcz + aterm.tcz + fltk-1.3.tcz + flwm.tcz + wbar.tcz

TinyCore becomes simply an example of what the Core Project can produce, an 16MB FLTK/FLWM desktop.


CorePlus ofers a simple way to get started using the Core philosophy with its included community packaged extensions enabling easy embedded frugal or pendrive installation of the user's choice of supported desktop, while maintaining the Core principal of mounted extensions with full package management.

It is not a complete desktop nor is all hardware completely supported. It represents only the core needed to boot into a very minimal X desktop typically with wired internet access.

The user has complete control over which applications and/or additional hardware to have supported, be it for a desktop, a netbook, an appliance, or server, selectable by the user by installing additional applications from online repositories, or easily compiling most anything you desire using tools provided.

Note: The last four changes had been previously implemented in corepure64, but omitted from core by mistake.