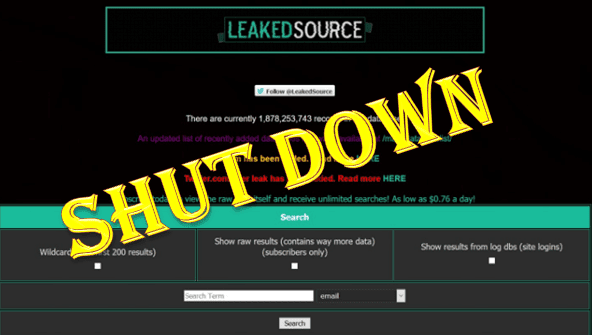 LeakedSource has always maintained that the information in its database was already publicly accessible. "All we do is combine it in one easy to use location," a spokesperson told Wired recently. Some suspect the team was encouraging the community to come forward with new data dumps, however. Troy Hunt, a security researcher that runs a similar service called Have I Been Pwned, writes on his blog:

"There was a constant flow of data that wasn't appearing anywhere else in the usual trading circles before first coming to air via their service. Speculation was rife that there was incentivisation occurring not just to provide data that had already been obtained, but to actively seek out new targets."

"Yeah you heard it here first. Sorry for all you kids who don't have all your own Databases.

Leakedsource is down forever and won't be coming back. Owner raided early this morning. Wasn't arrested, but all SSD's got taken, and Leakedsource servers got subpoena'd and placed under federal investigation. If somehow he recovers from this and launches LS again, then I'll be wrong. But I am not wrong.
Also, this is not a troll thread.
EDIT: Don't forget that LTD was the first person to make this news public.