NSA Chief: We Warned France About Russian Hacking Of Elections 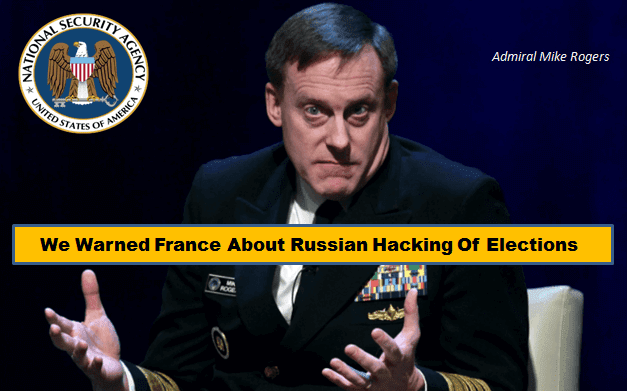 
NSA chief Admiral Mike Rogers said Tuesday, that Russia was behind the hack of French President-elect Emmanuel Macron's campaign team and US Cyber Security agency had informed to France officials.


There are approximate Nine gigabytes of data including emails and document from Macron's campaign were leaked online by Cyber criminals on Friday.

According to FT,
"We had become aware of Russian activity,” said Admiral Michael Rogers, NSA director. “We had talked to our French counterparts prior to the public announcements of the events that were publicly attributed this past weekend, and gave them a heads-up: ‘Look, we're watching the Russians, we're seeing them penetrate some of your infrastructure’.”

We're all trying to figure out how can we try to learn from each other.

“You see every nation-state engage, they’ll penetrate a system, they will look to not just extract but study it, understand it, see where it connects to, can they use that as a jumping-off point to get to somewhere else,” he said. “I’ve seen nation-states engaged in the activity in the US where they clearly are interested in a long-term presence, not just extracting data.”

Adm. Rogers said NSA learned of Russian efforts to compromise U.S. political institutions in the summer of 2015 and warned the FBI and the Pentagon.

Last weekend, in the final days of the 2017 French presidential election, the eventual winner, Emmanuel Macron revealed that his campaign had been hit by a massive cyberattack.

“No, I have not,” Adm. Rogers replied, adding that the U.S. must be more assertive in calling out Russian cyberattacks. “They need to know we will publicly identify this behavior.”
Labels: Cyber News, Data Leaked, Hacking, Security
Share This To :
Newer Post Older Post