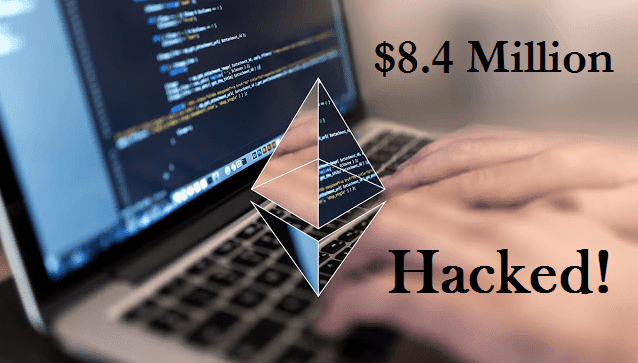 
Veritaseum known itself as peer-to-peer investment banking service. It had opened a toke sale in April 2017. The Hack occurs during Initial Coin Offering (ICO) on this Sunday. ICO allows the investor to purchase the tokens, like similar an IPO.

This incident, although uncomfortable for us, shows that the numbers listed are real and the market for VERI is real https://t.co/df79EMulC1
— Veritaseum UltraCoin (@Veritaseuminc) July 24, 2017

In the blockchain discussion,
We were hacked, possibly by a group. The hack seemed to be very sophisticated, but there is at least one corporate partner that may have dropped the ball and be liable. We'll let the lawyers sort that out, if it goes that far.

Although I hate to see assets stolen, and I hate theives, the incident proved both the resilient demand for our tokens and the utility of the decentralized exchange EtherDelta.

The hacker(s) made away with $8.4M worth of tokens, and dumped all of them within a few hours into a heavy cacophony of demand. This is without the public knowing anything about our last traction.

I would like to make it known that we had the option to fork VERI, but chose not to. At the end of the day, the amount stolen was miniscule (less than 00.07%) although the dollar amount was quite material.

Another point that I would like to make clear is that Veritaseum tokens are software that represent our knowledge, advisory and consulting skills, products and capabilities. Without the Veritaseum team, the tokens are literally wortheless! If someone were to someone confiscate 100% of the available tokens, all we need to do is refuse to stand behind them and recreate the token under a new contract. Again, we aren't selling currencies, we aren't selling securities. We are selling capabilities, and ability for those capabiliteis to connect parties P2P for the autonomous transfer of value. You can get away with a large securiteis heist, or a large currency heist. The Veritaseum team is what powers the value behind the Veritas token. A large theft of those tokens after a fork is as valuable as stealing 90M empty plastic cups.
Labels: Cracking, Cyber News, Hackers, Hacking, Website Hacking
Share This To :
Newer Post Older Post