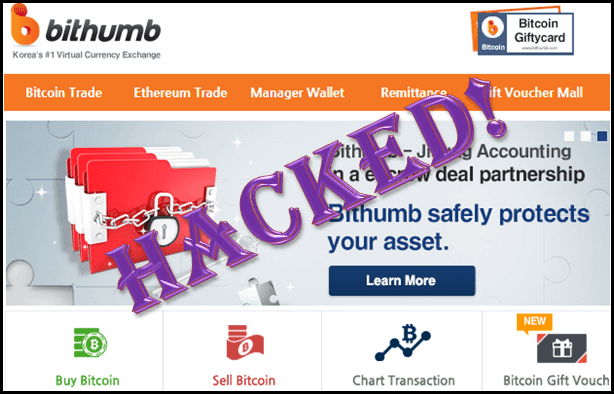 One of the biggest Crypto Currency exchanger in south Korea BITHUMB gets hacked. The Company allows members to buy and sell CryptoCurrency Bitcoin and Ethereum.

It is one of the top virtual currencies in the world. According to the trading Volume, Bithumb company comes under the five largest crypto exchange trading company in the world.

According to report, South Korea based company Bithum said, more than 30,000 of its customers data were stolen. And official agency is investigating on this Cyber Attack.

Bithumb said in the blog,


Good morning. The bitsseom.
The compensation of all confirmed today the leakage of personal information Dear customer 100,000 won and completed bulk payments to the account of the customer.
In addition, as a result of this event for you to wear new additional damage will be compensated for the damage as soon as payments are a fixed amount of damage to the responsible stance of the representative exchange.
We apologize once again bowed his head, will become a more rewarding bitsseom we believe that gives you Dear using bitsseom.
Thank you.


Bithumb customers were even reportedly complaining about attacks on Naver, a South Korean Social media site, but company was not keen to consider those feedback's as a suspicious vector so ended up losing their trust too.