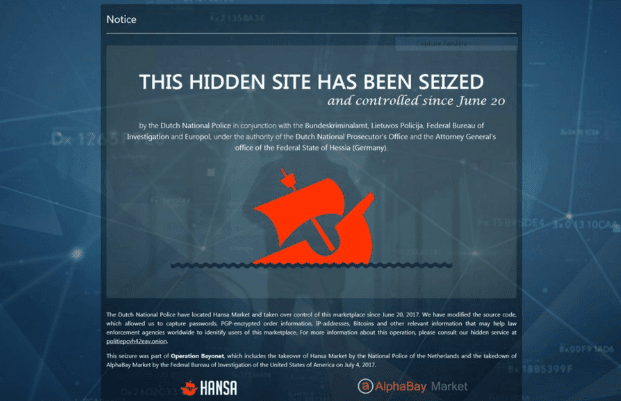 
The European and American officials said on Thursday that two largest online black market websites, AlphaBay and Hansa Market has shut down. Not only that, they have arrested their founders and operators too. It is one of the largest operations against dark web marketplace termed as 'Bayonet' coordinated by United states and European authorities.

Just few days before this take down agencies arrested AlphaBay co-founder, Alxandre Cazes, Canadian man who was living in Bangkok. But Cazes committed suicide in the cell shortly after he got arrested.

Later on Thursday, the Dutch National Police announced that they had control of Hansa Market since June and they were monitoring their activities for over a month now, and finally they have taken down the website.

It is part of the strategy to shutdown Alphabay first and then monitor the traffic of Hansa market and collect the details about their functioning, network and other activities. It was expected that when one website shuts down, the number of users on the other website will increase exponentially and the plan finally worked. AlphaBay was 10 times larger than SilkRoad.

Reports suggested that these sites are operating over anonymous platform TOR network and selling illegal drugs having lakhs of active members on their site. They are using digital currencies such as Bitcoin, Ether and Monero for payments.

But there are many other players in the dark web ready to fill those shoes and authorities have to make continuous effort to take them down and make the world better place to flourish.

“Critics will say that as we shutter one site, another will emerge, and they may be right,” Andrew G. McCabe, the acting director of the Federal Bureau of Investigation, said on Thursday.

“We know that removing top criminals from the infrastructure is not a long-term fix,” he added. “There is always a new player waiting in the wings read to fill those shoes.”