Flight Boeing 757 Was Remotely Hacked Without Knowledge of Pilots 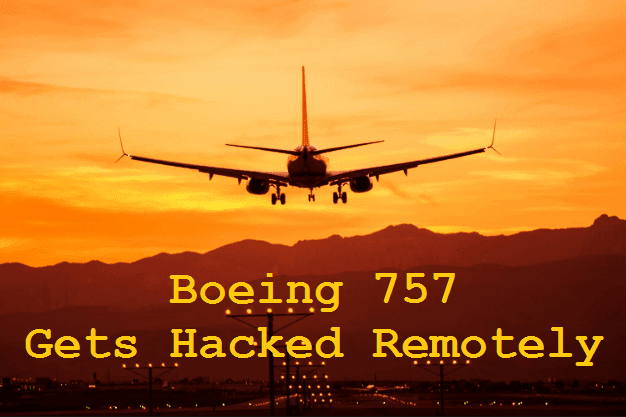 Flight Boeing 757 Was Remotely Hacked Without Knowledge of Pilots.

This hack exposed in 2017 CyberSat Summit which was held on 8 November, 2017. Robert Hickey, Program Manager at Homeland Security CyberSecurity Division revealed, the team of researchers need only two days to remotely hack Boeing 757 parked at the airport in Atlantic city, New Jersey and it took place in September 2016.

According to CBS news,
Homeland Security said his team used "typical stuff that could get through security" and hacked into the aircraft systems using "radio frequency communications."

"The 757 hasn't been in production since 2004, but the aging workhorse is still flown by major airlines like United, Delta and American," said Mark Rosenker, the former chair of the National Transportation Safety Board.

“They don’t exist in the maintenance world,” Hickey said, noting that when he was in the Air Force, he commanded a logistics group. Hickey was also an airline pilot for more than 20 years. The chief information officers of airlines “don’t know how to chase a cyber spark through an airplane either,” Hickey said. “Why? Because they have been dealing with, and they’re programmed to, and they do a great job of, protecting the terrestrial-based networks. Airplanes are absolutely different — crazy different.”

Trying to deal with airplane cybersecurity the same way it is approached for land-based networks “is going to leave us short of the mark,” Hickey said.

A Boeing spokesperson said: "The Boeing Company has worked closely for many years with DHS, the FAA, other government agencies, our suppliers and customers to ensure the cybersecurity of our aircraft and will continue to do so.

"Boeing observed the test referenced in the Aviation Today article, and we were briefed on the results. We firmly believe that the test did not identify any cyber vulnerabilities in the 757, or any other Boeing aircraft."

Two years ago one of the security researcher claimed that he hacked flight entertainment system, while he was travelling in the plane. But there is no Evidence
Labels: Cracking, Cyber News, Hackers, Hacking, Intrusion Detection System, Monitor, Network
Share This To :
Newer Post Older Post