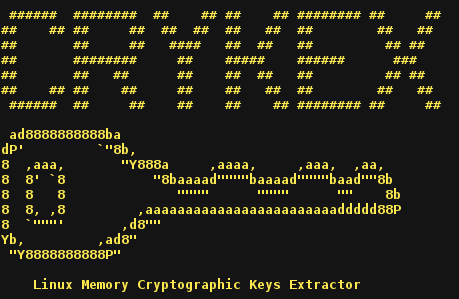 Some work has been already published regarding the subject of cryptograhic keys security within DRAM. Basically, we need to find something that looks like a key (entropic and specific length) and then confirm its nature by analyzing the memory structure around it (C data types).

The idea is to dump live memory of a process and use those techniques in order to find probable keys since, memory mapping doesn't change. Thanks-fully, tools exist for that purpose.

The script is not only capable of injecting into already running processes, but also wrapping new ones, by launching them separately and injecting shortly afterwards. This makes it capable of dumping keys from almost any process/binary on the system.

Of course, accessing a memory is limited by kernel, which means that you will still require privileges for a process.

Linux disk ecnryption (LUKS) uses anti-forensic technique in order to mitigate such issue, however, extracting keys from a whole memory is still possible.

Enter a password twice, then some text and before terminating:

When prompted for passphrase:

Despite Firefox not being explicitly affected, Tor Browser Bundle is still susceptible due to tunneling:

As said, you can also wrap processes: