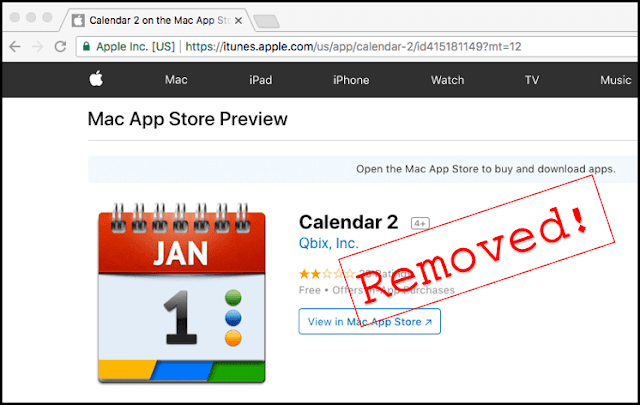 The Calender 2 App, it aims to include more features than the Apple calendar App bundle with macOS. The application is developed by Qbix.


Currently it has removed from an official Mac App Store at itunes.apple.com/us/app/calendar-2/id415181149

According to the report of Arstechnica,

"On the one hand, using the user's CPU for cryptomining has become extremely unpopular," Thomas Reed, director of Mac offerings at anti-malware provider Malwarebytes, told Ars. "The fact that this is the default is something I don't like. I would want to see a legit app informing the user in advance or making it an option that can be turned on but is off by default. On the other hand, they [the developers] do disclose that they are doing it and give other options for people who don't like it. My personal feeling on this is that, given the disclosure, I think the user should be allowed to make their own choice. Some people might be perfectly willing to let an app like this mine cryptocurrency so that they can use it for free." 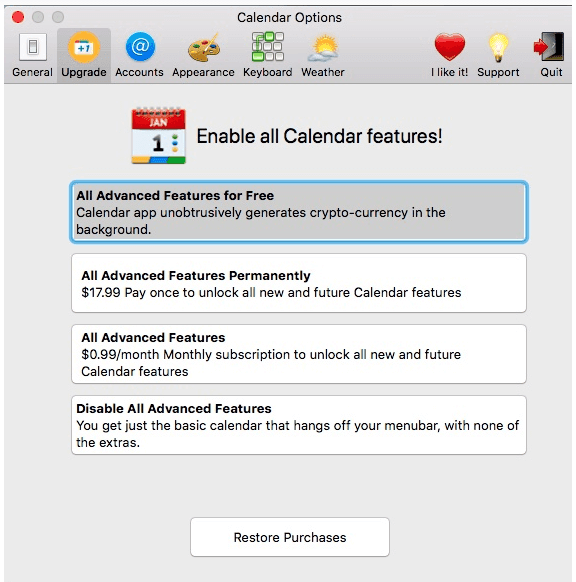 Qbix founder given statement to Arstechnica in email,
In an email, Qbix founder Gregory Magarshak said the rollout of the currency miner has been complicated by two bugs that prevented it from working as intended. The first flaw caused the miner to run indefinitely, even when users changed the default setting. The second bug caused the miner to consume more resources than planned. Developers programmed the miner to use 10 percent to 20 percent of a Mac's computing power, depending on whether the machine was plugged in. The new miner has been using much higher percentages.

After some time  Magarshak replied,

We have decided to REMOVE the miner in the app. The next version will remove the option to get free features via mining. This is for three reasons:

1) The company which provided us the miner library did not disclose its source code, and it would take too long for them to fix the root cause of the CPU issue.

2) The rollout had a perfect storm of bugs which made it seem like our company *wanted* to mine crypto-currency without people's permission, and that goes against our whole ethos and vision for Qbix.

3) My own personal feeling that Proof of Work has a dangerous set of incentives which can lead to electricity waste on a global scale we've never seen before. We don't want to get sucked into this set of incentives, and hopefully our decision to ultimately remove the miner will set some sort of precedent for other apps as well.

Ultimately, even though we technically could have remedied the situation and continued on benefiting from the pretty large income such a miner generates, we took the above as a sign that we should get out of the "mining business" before we get sucked into the Proof of Work morass of incentives.