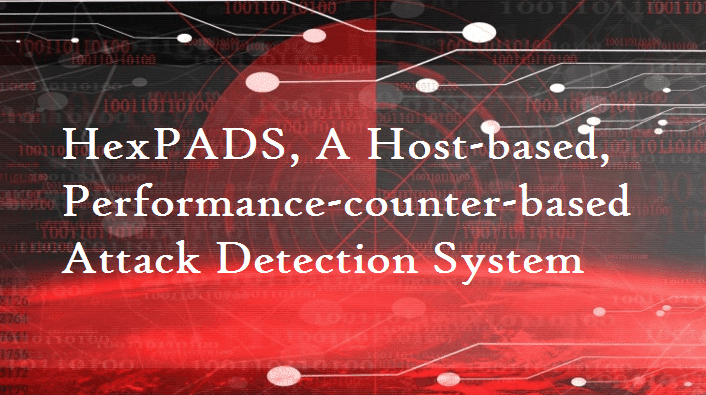 Current systems are under constant attack from many different sources. Both local and remote attackers try to escalate their privileges to exfiltrate data, to escalate privileges, or to gain arbitrary code execution.

While inline defense mechanisms like DEP, ASLR, or stack canaries are important, they have a local, program centric view and miss some attacks. Intrusion Detection Systems (IDS) use runtime monitors to measure current state and behaviour of the system to detect an attack orthogonal to active defenses.

Cache behavior is a strong indicator of ongoing attacks like rowhammer, side channels, covert channels, or CAIN attacks. Collecting performance metrics across all running processes allows the correlation and detection of these attacks. In addition, HexPADS can mitigate the attacks or significantly reduce their effectiveness with negligible overhead to benign processes.

Keep ./src/hexpads running in a terminal. In a second terminal, enter the ./test directory and run any of the following attacks:

CAIN was developed by Antonio Barresi, C6 by Clementine Maurice, CSC by Daniel Grauss, and rowhammer by P0 at Google. The source code of their software can be found in their repositories. The test directory contains pre-compiled versions for x86-64 on Ubuntu 15.10.

Depending on the mitigation you have selected you need to take special measures to kill the test process. E.g., with SIGSTOP you have to kill the corresponding process from another terminal as it was stopped on the current screen.