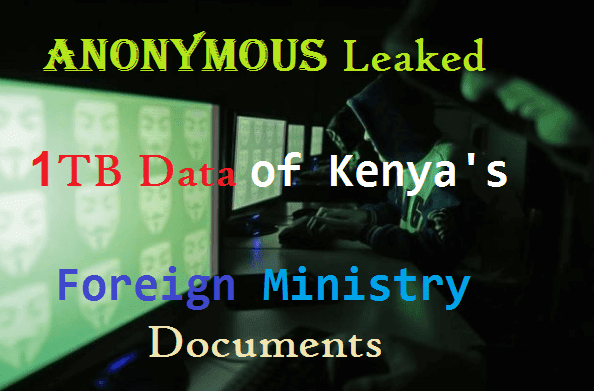 Online Africa activist group has leaked the news that they had started to leak the government documents from Kenya’s foreign ministry to expose government and about the corruption of the government of Africa.

The document which is published contains around 95 documents. The documents are published  by an anonymous twitter account , the most pages of the documents have one terabytes data having dates of a deal of foreign ministry and international trade.

One of the Anonymous member told to HackRead ,

We have 1TB of data but at the moment, we have leaked just one portion of it. In few days you will receive full disclosure of the data – We the Anonymous will stand against corruption, child abuse, and child labour! The government of Kenya should have expected.

The hacktivist group has announced  the first attempt of Online Africa in January  to escalate computer attacks on governments in Rwanda, Uganda, South Africa, Zimbabwe, Tanzania, Sudan and South Sudan and Ethiopia.

But on that time, Kenya government is not in the list.


Finally, the conclusion was that “nothing is secret.”

The ICT Cabinet Secretary Joseph Mucheru told Reuters the attack was a phishing attack, as opposed to a hacking attack on the foreign affairs ministry's computer systems, and that no classified material had been accessed.

"What they did is they managed to send emails to people, and people clicked the links to change their credentials, and as a result they were able to access emails," he told Reuters by phone. "Our systems have remained safe and stable."

"What we have been able to identify is mostly on security clearance 'Open' as opposed to 'Restricted' or 'Top Secret'."

Mucheru said they were working to alert government employees on how to avoid being tricked by phishers and hackers.

There is a series incident for the Operation Africa hackers.

In January, they declared that they have leaked the documents of African government to dismantle them against the corruption, environmental  Issues, child abuse and child labor.

In February, they reported that they breached the database of around 1500 employees , their names , their email address of the African government.

In February and march, they claimed that they have stolen the database of employees of Tanzania Telecommunications.
Labels: Anonymous, Data Leaked
Share This To :
Newer Post Older Post