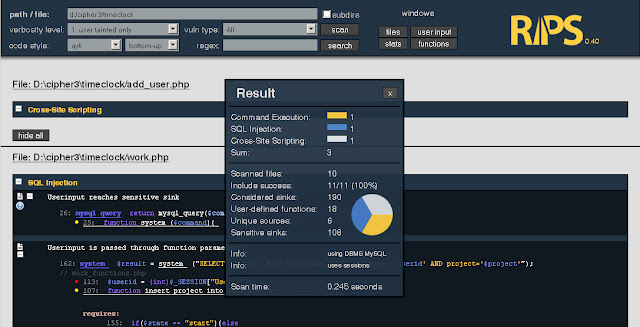 RIPS is a static source code analyzer or you can say it is a kind of static code analysis tool that can automatically detect the vulnerabilities in web applications of PHP.

It’s initial version was designed in PHP as well as it was released during the Month of PHP Security in May 2010 which performs as open-source software.

Here is a new version is available which is rewritten in PHP and it is available as cloud and also it has the standalone product that beats the fundamental limitations of the open source version.

Here are the detection of the following vulnerability types is supported:

For each and every vulnerability there is an integrated code viewer which can be disclosed in order to highlight the infected code lines in the real source code. Besides, there is a help which is accessed to recognize the vulnerability as well as it develops can be created automatically. The interface also recommends a list of scanned PHP files, user-defined functions, as well as detected sources.