By default is comes with 'memfd_create' which is a new way to run Linux elf executable completely from memory, without having the binary touch the hard drive.

The only included payload 'memfd_create' is based on the research of Stuart, this payload creates an anonymous file descriptor in memory it then uses fexecve to execute the binary directly from the file descriptor.

This allows for the execution completely in memory which means that if the linux system gets restarted, the payload will be no where to be found. 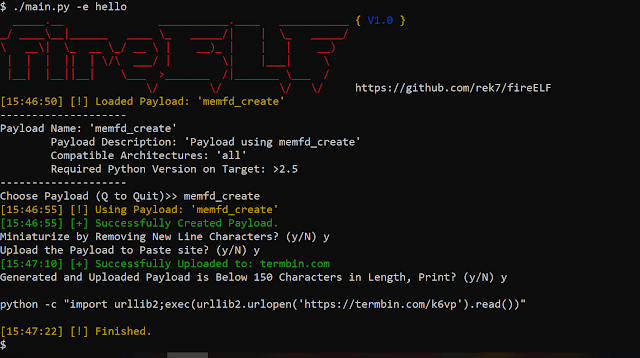 By default fireELF comes with 'memfd_create' but users can develop their own payloads. By default the payloads are stored in payloads/ and in order to create a valid payload you simply need to include a dictonary named 'desc' with the parameters 'name', 'description', 'archs', and 'python_vers'. An example desc dictonary is below:

In addition to the 'desc' dictonary the entry point the plugin engine i built uses requires a main function which will automatically get passed two parameters, one is a boolean that if its true it means its getting passed a url the second parameter it gets passed is the data.

An example of a simple entry point is below:

If you have a method feel free to commit a payload!

fireELF is developed in Python 3.x.x