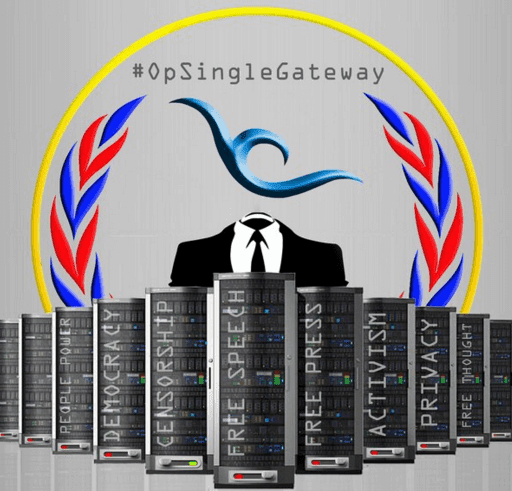 Hacktivist group also leaked Private information about officers. This attack is the part of #OpSingleGateway Campaign by Anonymous.

What is the reason ?
Thailand Government purposed a single internet gateway to provide the country. It means Government can control the internet traffic which can effect on the internet freedom for Thai people.

By against the decision of Thai Government Anonymous targeted CAT (Telecom Company) and started #OpSingleGateway.

CAT Telecom data was also leaked 1000 of customers with login, passwords and Ids.


According to Hacked.com , The Statement from Anonymous are:

Anonymous has been watching the conditions that are necessary for an open, tamper-free internet and freedom of speech systematically attacked within the kingdom of Thailand.

Anonymous will not sit idly by and watch another nation construct a Great Firewall, as China has done to keep its citizens from experiencing the competing viewpoints and ideologies that make up free and open discourse online.

The Thai military junta want to centralize and control completely the means with which the Thai people access the internet. This will enable them to monitor, censor or even entirely disable internet communications into and out of Thailand.

Although there have been numerous clarifications, denials, and confusing statements about the prospects of a single internet gateway in Thailand, it is our understanding that these plans are still in motion, still receiving funding, and still very much part of the government agenda."

Previous statement from Anonymous Asia on behalf of #OpSingleGateway

"It is unacceptable that you promote your own people, army executives at the Head of the largest Telecommunication operator: CAT Telecom. Any Corporations or individuals helping to deploy this single gateway will be targeted by any electronic means.

We will not only fight against the single gateway project but will expose your incompetence to the world, where depravity and personal interests prevail."

If you are a Thai citizen, understand that your data, the records of what websites you access or who you speak with online, and what you say to them is not safe in the possession of your government.

How do we know this?

Because their data is not safe from Anonymous.

Your government wants you to trust their motives in collecting information on your online activities; they want you to trust that they will be able to secure this data and will only use it for lawful means.

They cannot guarantee any of this.

If a single gateway for access to the internet outside of Thailand is created, with the inevitable accompanying databases that will contain details of traffic passing through the gateway, it will get hacked.

Imagine your entire life sitting on a single, poorly secured server. Credit card and banking details, private emails to your husbands and wives, pictures of your children, every website you have ever visited, everything that makes up the most intimate and private parts of your life - all open and waiting for anyone of ill-intent to steal and use however they wish. We are not trying to scare you. We are trying to highlight the risks your government wants to create for you, for your family, for your business. Under the guise of "increased security" and "vigilance," they will have exposed you in the most dangerous way possible to anyone who has the ability to circumvent their poorly-secured servers.

Ask yourself, is this "security" going to benefit you, or benefit the government that refuses to acknowledge the criticisms and concerns of its citizenry?

Facebook, Google, and Microsoft are being pressured to provide information on critics of the Thai junta, in a struggle between corporations and governments it will always be the average citizens who suffer.

We are with you, we want to show you the risks to your liberty and privacy, please stand with Anonymous and tell your government that this is wrong for the people of Thailand.

To prove our point we are demonstrating the inability of the Thai government to secure even their own police servers, it is pitiful and should worry all of Thailand.

Your police are protecting their files with passwords like 12345; it would be funny if it weren't so sad.

Here is the screenshot of Thai Police Server dump data by Hacked,