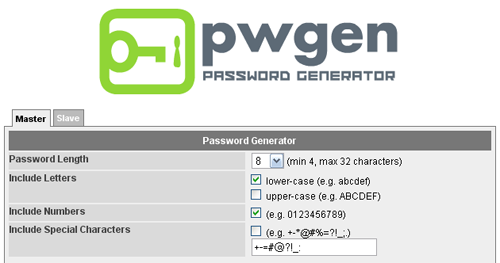 PWGen is a tool which generates strong cryptographic passwords. It is a tool used to generate professional secure strong  passwords, pronounceable passwords, pattern based passwords, passphrases based words from a list.

It uses a random pool technique to generate the random password from user indefinite inputs and volatile system parameters. It also provides the option for customizing passwords according to user needs and the password created have strong encryption.

As well as every PWGen release comes in two packages: The first one is portable version (PWGen-xxx.zip) that can be run on any 32-bit or 64-bit Windows system without any installation process. Fundamentally, you just required the executable PWGen(PWGen.exe) to run the application.

When PWGen is initiated for the first time then it will load its default options and generate a configuration(.ini) file in the folder where it is placed. Under certain conditions, you may have to protect PWGen from scripting to the device where it is being implemented such as - hard disk or USB flash drive.

And the second one is the setup version(PWGen-xxx-Setup.exe) which installs PWGen on Windows systems. It easily does the material that setup programs commonly do the copy files to the hard disk, generate an entry for the application in the start menu for creating a desktop symbol, and etc.

The important difference between the setup version and the portable version is the location of the configuration file: In comparing to the portable version, it is not placed in the directory of PWGen, but in the so-called path which is known as %APPDATA% but the Program Files folder is script-protected if the implementing user does not have the rights of administrator. All files in the %APPDATA% folder will be removed when PWGen is uninstalled.

To install new languages, remove the .lng file from the package of language into the folder where PWGen is located (e.g., C:\Program Files\PWGen).

PWGen is a free software and is spread under the GNU GPL. You are optimistic to have a look at the source code of the application.

PWGen is scripted in the C++ programming language with Borland C++ Builder 6. The package of source code having the instructions for compiling and building the executable PWGen.