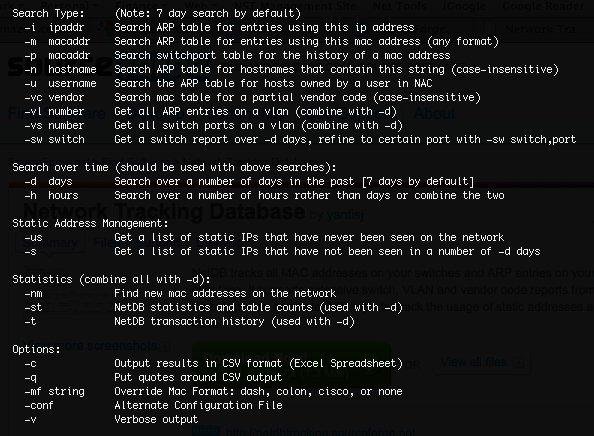 The Network Tracking Database(NetDB for short) tracks all changes to the MAC address tables on your switches and the ARP tables on your routers that is over time stored in MySQL.

It supports the extensive switch, VLAN and vendor code reports from a CLI or Web App. NetDB can generate CSV reports, track the usage of static IP addresses, record neighbor discovery data and much more.

There is now a VM "appliance" with easier upgrades available in the Files section. NetDB keeps track of devices on your network as well as the status of your switch ports over time. You can map devices to your switch ports, locate ports configured for a VLAN and also recover unused switch ports as well as static addresses.

NetDB has been considered for use by network teams and also security teams, helpdesk and the end users of any medium to large network, finally eliminating the support issues. It has been tested with approximately every Cisco Ethernet switch, is written in Perl and also performs on most Linux and BSD distributions. It is designed for huge campus networks as well as data centers since it should work in any environment.