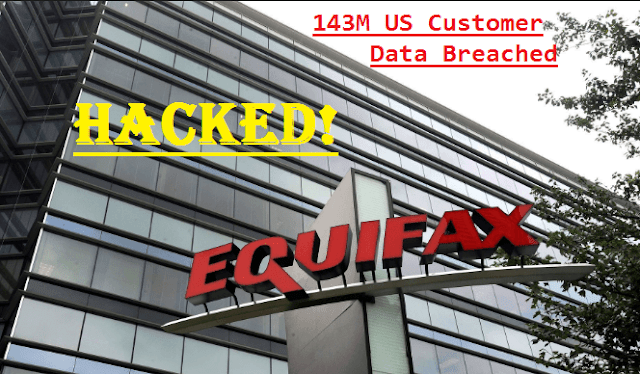 Equifax exposed the credit report information of about 143 Million US customers who got compromised in this massive Cyber Security breach.

Birthdate, Home address, SSN Social Security Numbers and some more private information might have been accessed by CyberCriminals. Some of the UK and Canadian customers were also affected in this incident. Currently there is no evidence for this massive data breach. Cyber Investigation is on the way.

Equifax is a consumer credit reporting agency in the United States, considered one of the three largest American credit agencies along with the Experian and TransUnion. Founded in 1899, Equifax is the oldest of the three agencies and gathers and maintains information on over 800 million consumers and more than 88 million businesses worldwide.

The information accessed primarily includes names, Social Security numbers, birth dates, addresses and, in some instances, driver’s license numbers. In addition, credit card numbers for approximately 209,000 U.S. consumers, and certain dispute documents with personal identifying information for approximately 182,000 U.S. consumers, were accessed. As part of its investigation of this application vulnerability, Equifax also identified unauthorized access to limited personal information for certain UK and Canadian residents. Equifax will work with UK and Canadian regulators to determine appropriate next steps. The company has found no evidence that personal information of consumers in any other country has been impacted.

Company tweeted and apolozise for this cyber security breach

(2/2) We apologize to our consumers and business customers for the concern and frustration this causes. Learn more: https://t.co/ivVHFb2xA4.
— Equifax Inc. (@Equifax) September 7, 2017